Seems pointless having multiple disused blogs for various projects and scales, when I could have them all on one blog, right?

Thanks to everyone that followed, or still follows, and hope to see you over there.

An update about lack of updates...

Or words to similar effect.

Still, in a bid to be more proactive, I've set up a facebook page, which might, by dint of being less hassle, see more updates than this poor, neglected blog.


Swing by and say, 'hello', or 'like it' or whatever it is you cool kids do.   You never know, enough pressure and I might actually get some stuff done   ;)
Posted by gaarew at 23:43 No comments:

On a roll (he says tentatively)

Well, straight off the back of finishing off the VSF for RPE, I've completed my first 5 Scourge minis from Rebel Minis (available here). 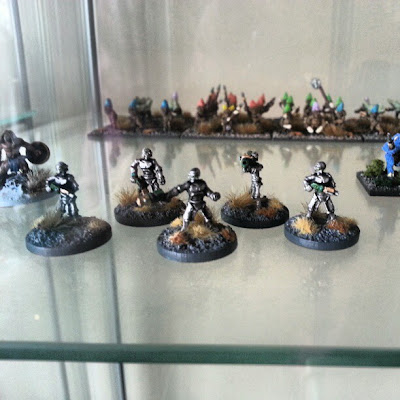 Basic squad to begin with, one each of the four infantry poses, plus a missile launcher from the Heavy Weapons pack.  At least 5 stages on the metals, and all the eyes are dotted in, and the missile launcher drilled out.

I've got the Leader figure pretty much done, as well as having started on a second unit, this time with chain gun/assault cannon, as well as the two sniper rifle/lascannon type weapons.  I'm also in the process of cleaning up 3 more squads, using the other chain gun and missile launcher poses, as well as the remaining heavy weapon, which, well, I'm not really sure what it is...

I also picked up a few movement/display trays from Martin at Warbases.  They are designed to fit figures based on pennies, but work really well with the 20mm bases, there is just a tiny gap, so it saves the paint rubbing when you slot them in.  Working on the first of them just now, so should have something to show soonish.


Think I may have to invest some time into getting a wee 2x2 or 2x3 15mm sci-fi table sorted out.  And some rules for them obviously...


And I might have finished assembling the box of PSC Panthers as well, although, they still need detailing.  One Panzer IV to go, and that is it all built.
Posted by gaarew at 12:21 No comments:

Well, here is a picture of the1879 Victorian Sci-Fi figures I recently painted up for Ral Partha Europe.  18mm scale, wearing the latest in Miasma mask technology.

Brief was traditional Red coat colours with brass goggles and blue lenses.  Steady hand required for that but it wasn't as bad as I feared.  Bases are done as blasted wasteland, so muted colour with vegetation tending towards the brown/red spectrum.

The figures are based on 50x25mm bases, from Warbases naturally.


Details about the 1879 game are sketchy at the moment, but there are a couple more images on their Facebook page.
Posted by gaarew at 12:18 No comments:

Living under a rock...

Cryptic much?  Watch this space.

Incoming VI (although, it's probably a bit more than that...)


So much for trying not to spend too much...


I was going to hold off on getting the Copplestone Picts, but the 10% discount code swung it for me, and I ordered them at the last minute.  Well, about 7am yesterday, and they turned up this morning.  How's that for service?

Also, package in from Stateside, from Rebel Minis with my order, which was -


2 x Packs Romana Wolven. Didn't realise how big these guys actually are.  They will possibly be part of the Barbarian force, or perhaps the beginnings of a full Werewolf army.


2 x 15mm Elementals.  Really like these sculpts, there is something quite cartoony in the heads.  Looks like I'll be doing a Sorcerer's Legion army too...  Of course, I'll need more than just these guys.

2 x 15mm Gargoyles.  Again, some models for the Sorcerer's Legion.  I reckon these will be pretty quick to paint up (once I get around to it) possibly with all sorts of overgrown vegetation effects to really give them that dilapidated statue look.

1 x The Scourge Heavy Weapons Team.  Some heavy reinforcements for the previous Scourge models I picked up.  They were out of stock last time I ordered, so I figured I'd grab them whilst they were available again.

1 x Titan Marines MK1 HAMR Suit.  And this big guy is to reinforce the Titan Marines.  Scalewise, probably something I'm a bit more familiar with, being about the same size as a light 'jack for WARMACHINE.

So yeah, more lead for the lead pile, thus guaranteeing my continued existence.  (As everyone knows, when you paint your last unpainted mini, you die...)

I have a few days off coming up, and between her shifts and commission work, I'll try and get some more 15mm work done.  I'm pretty close to finishing off my Shaman base, and it'd be nice to knock out both the Archer bases too.  Or I'll do a bit more to the Beastmen, or start the Sorcerer's Legion...   Speaking of which, I'll probably rustle up a suitable Demonworld figure to use as the Sorcerer, as well as the cultists that I'd have gotten if I'd bought the box set.

OK, so I promised an update...

Well, the kids are all in bed now, and I've got about an hour before she gets in from work and I head out, so, here goes. 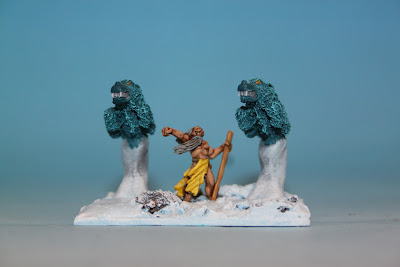 Done a bit on my Shaman stand for the Barbarians, I seem to have spent a fair bit of time on this one, possibly longer than I'd normally spend on a 28mm model.

I still have a bit of work to do on the hair/beard, possibly another highlight on the skin, and the teeth, claws and eyes on the Spirit Wolves, as well as looking at how they rise out of the base. 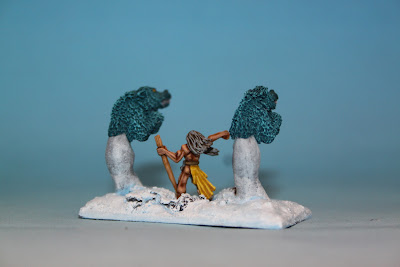 I don't know how good it is for my sanity, but jumping from basecoat and washing 28mm models, to doing 3-4 layers of highlights on 15mm stuff is a bit strange.  Still, I'm very happy with how he is looking so far, and I like the idea of the Spirit Wolves being conjured up out of pillars of snow.


I've basecoated all the skin on the Archers and Warriors, as well as the metalwork and shields.  I've also blocked in the fur on the Yetis/Snow Trolls.  With hindsight, Dunc was right about the difficulties of painting after having based the models, but the inherently messy drybrushing would have wrecked any paintwork anyway, as the following image shows.


In other news, I've persuaded a gaming buddy to take the plunge into 15mm gaming, he's ordered his first army and hopefully we can turn our regular Wednesday night game night/hobby chat into something more productive, either lots of small scale painting, or some rules development.  Time will tell.  I'll badger him to start a blog too.

That's about it for now, time to grab a brew, head out to work and relish the thought that when I get home in the morning, she is back out to work and I have another 9 or so hours before I can head to bed...

All your base are belong to Polyfilla.

Well, that is the case for the Barbarians anyway.  Spent the last couple of mornings after work doing all the filler work on all the bases I'd already assembled, and I have sorted out a little force that I'll get to painting as soon as possible.

Plan for tonight is to get the majority of the painting done on the bases before work.

So, yeah, I have been pretty busy between work and the kids being off for Easter...

...but I've still managed to get a bit done.

Orders arrived in from Copplestone and Veni Vidi Vici so I have all the resin terrain pieces, some Archers and some handy 15mm scale Viking transfers and basing paste.  As well as a free tape measure.

Ok, so, on the painting front, I've finished 3 bases of Beastmen, one each of Additional Hand Weapons, Spears and Armoured with Great Weapons.  I didn't go with the snow style bases, as I wanted to have them rampaging through the undergrowth, and when I add the Chariot conversions, well, they will have wheels, not runners, so they wouldn't work too well in snow...

I really like the various shades of blue, with each model being sprayed, inked, and then drybrushed 3 different shades.  I have some purple ones started as well, I'll mix these in to further bases, and I have some based up to act as high ranking Beastmen on the Command stands.

And I've done a conversion of one of the Beastmen with a Chariot Miniatures Wielder of Magic to make a Beastman Shaman.


Nothing too complex for starters, just a headswap and a little putty work to cover up the saw marks.

I think I'll follow the general build of my Cave Imp army for these guys, but as there are no missile troops, it'll be -

I still need to pick up the  Beastmen Berserkers, although I have started painting up the Champion from the Beastmen heroes pack. 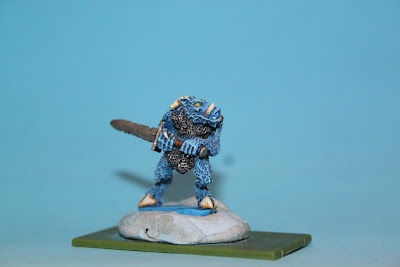 He'll either get mixed in with one of the bases, or I'll base him up on a 50x50 base with a few smaller Beastmen around him, and use him as a unit filler model that counts as two stands.

I also grabbed one of the Flames of War small barns from Warbases to paint up as a test piece, rather than tiling the roof, I used some fake fur to give it a thatched look, as it ties in better for Fantasy/Dark Age style games.  The wood panelling was hand painted (whilst tipsy), because I figured the lines didn't need to be too straight...


So, yeah, that's about it for the update.  I did get my PSC Panthers in, and have built one of them up, absolutely cracking kits.  I also might have to get some more after reading this...

Finally, I ordered the Wolven from Rebel minis, as well as a few other bits and bobs, I'll list them when they arrive.

Nothing to see here...